CHUG THAT GATORADE...IT'S TIME FOR SPORTS

After a 2 week pause on winter athletics, our teams are now engaged in what seems like a continuous sprint of activity. Between all the competitions, bi-weekly COVID19 testing, and navigating the ever-changing safety protocols, I wanted to give you all a quick summary of things so far:

Football
I'm not sure if you saw this or not, but an official news release was just put out by the NIAAA, which announced that Cole Hagen was the male national recipient of their annual scholarship. This is the largest athletic and academic organization in the country saying that Cole Hagen was the number 1 male academic athlete in the class of 2020. And while Cole has graduated, I felt it was important to pass this along and a credit to his coaches, teachers, counselors, and administrators who helped Cole to that award.

Boys Basketball
Our boys are coming off a school record 105 points scored in their win at Taylorsville on Friday and open region play against Skyridge this coming Friday. The team is currently ranked #3. Key players for the boys are Trace Ross, Carter Welling, Max Toombs, Peyton Call, Tate Staley, and Phil Harris. The varsity team has a cumulative GPA of 3.691.

Wrestling
We have a great group of boys that are competing in multiple duals and tournaments each week. They have had to deal with multiple schools canceling last minute and tournament restrictions changing daily. But so far, so good for our boys. They will have their annual Battle for the Shield with Alta next week here at CC, with a couple of more matches at home the following week. The varsity team has a cumulative GPA of 3.567.

Cheer
Our cheerleaders won the Region title this past weekend and will be competing at State soon. Our girls are also competing for national titles via virtual competitions that require them to film their routines and be judged remotely.

Drill
Our drill team had their first competition this past weekend and would have placed 3rd except for some nerves that led to deductions. The team is filled with girls who are competing for the first time, so there is a bit of an adjustment. The team has a cumulative GPA of 3.763.

Swim
The swimmers were finally allowed back in the pool after an extended shut down by the County. The season has been far from normal, but there are still many that are among the leaders in the state, including Britta Catmull, Tyler Lybbert, Ruby Winget, Lily Afualo, Stephanie Guzman-De La Hoz, McKay Larsen, Steele Smith, Karson Spencer, Ethan Bangerter, and Jaxon Barlow. The girls varsity team has a GPA of 3.845 and the boys have a GPA of 3.513.

Teachers and Staff, we were able to put together a brief ceremony to recognize some of the students that have signed their National Letter of Intent to continue their education and athletic career in college. Principal Jensen was able to twist enough arms at the District to allow our students to be recognized amid the COVID19 mess. Congrats to the following:

​BASKETBALL ON THEIR WAY TO SUCCESS

Fall Sports: GET OUT THERE 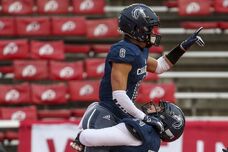 ​The football team wanted to give itself a challenge last week by seeing how many mistakes it could make in a game, and still win. Mission accomplished! In all seriousness, the team continued their winning streak with a tough win against a very good Skyridge team. The results last week meant that our football team has already wrapped up the region 4 title and will conclude the regular season on Wednesday.​

​Grace Weichers qualified in 1st Singles and Jane Dorny and Cassidy Rich qualified in 1st Doubles for the 6A State Championships. Play for these girls begins on Thursday at Liberty Park.
UPDATE: Grace Weichers made it to the semis in 1st Singles and the team of Jane Dorny and Cassidy Rich made it to the semis as well. Great job to these ladies and their coaches. 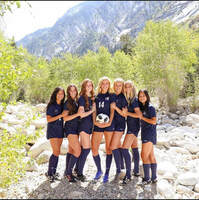 In the Quarterfinals of the playoffs, our lady chargers lost 4-1. But Despite this loss they truly had a remarkable season. they've pushed through injury, changes in their line up, and quarantine. they have done great things, good job to our lady chargers!

CORONA NOT SLOWING DOWN CHARGER ATHLETICS